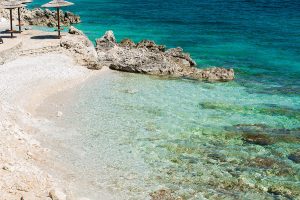 Today, Rabac is a well-known tourist resort. By the middle of the 19th century, it was a small fishermen village with hardly ten houses. Due to the beautiful bay and splendid, tame surroundings, it soon attracted first visitors. In 1876, Richard Francis Burton, an English writer and a passionate traveler, was among the first tourists who stayed in Rabac. Having seen Rabac and other places on the Istrian coast, he wrote a book of the same title ‘The Istrian coast’, describing, among other things, the beauties and charm of Rabac.
At that time Rabac witnessed the building of the first villas. The most well-known was the villa belonging to the Prohaska family, Czechs by origin, who were distinguished tradesmen from Rijeka. Unfortunately, the villa was destroyed during the Second World War, but one of the most attractive locations in Rabac still bears the name of Prohaska.
‘Quarnaro’, the first hotel in Rabac, was opened on 11th June, 1889 in the house of the Viskovic family situated close to the present ‘Orlando’ atelier. The hotel had only a few rooms and a pub on the ground floor.
Kaiser, the Austrian officer, who was a regular client of that first hotel, later bought Dubrova, an estate close to Labin. Today, Dubrova is hosting the Mediterranean Sculptors Symposium and is becoming ever more famous for its magnificent park of sculptures.
The chronicle writers would point out yet another curiosity – at the beginning of this century in 1907, Prince Ferdinand, the Austro-Hungarian heir to the throne, visited Rabac and was saluted by people who had gathered in the harbor.

The inhabitants of Rabac were skilled fishermen, seamen and owners of some ten sailboats which were either destroyed in the maelstrom of the Second World War or pushed back by modern ships. The first larger hotel was built in the period of the Italian government in 1925 in the very center of Rabac and was called ‘Trieste’ -its name today is ‘Primorje’. The capacity of the hotel could not meet the ever growing demand of tourists, mainly from the northern parts of Italy. Hence the more intensive development of private accommodation took place. Ten years after ‘Trieste’, the ‘Dopolavoro’ hotel was built – presently the ‘Jadran’ restaurant.

Tourism in Istria, as well as in Rabac, began to develop during the sixties, when this small resort, due to its natural beauty , got the flattering name of ‘The Pearl of the Kvarner Bay’. Since then, all existing hotels, apartments, camping sites and the majority of the private houses have been built.
Among the visitors, for years now, the most numerous have been Germans and Austrians followed by English and Italians. Rabac can accommodate in one day even 11.000 visitors, mainly foreign, and several thousand bathers from Labin and its surroundings.

St. Andrea’s Church, from 15th century, is the oldest building heritage in the resort. 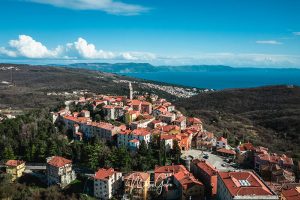 The medieval town of Labin is situated on the hill above Rabac. Its old name of Albona was first mentioned in 285 AD. The birthplace of Matthias Flacius Illyricus, the reformer and collaborator of Martin Luther, it is a cultural and administrative center today. The rich cultural and architectural heritage of Labin is enlivened by number of art ateliers and by the bustling youth gathering in the coffee bars scattered around the old town. The Sculpture Park in nearby Dubrova features over 70 forma viva stone sculptures.
After a walk through the narrow streets of the Old Town, pay a visit to the Town Museum with its archaeological and unique in this part of Europe, a miniature coal mine. Have a look at the Memorial collection of Matthias Flacius Illyricus, peek into the art ateliers, enjoy the view of Rabac and Cres island from the Fortica or pop into the small, elegant shops and take refreshments on one of the terraces of the local coffee bars. Whether to do business or just to have a chat, these are the places where everyone meets.

RES PUBLICA ALBONESSIUM’
Labin, a picturesque town situated on a 320 meters high hill and only three kilometers from the seaside, was inhabited 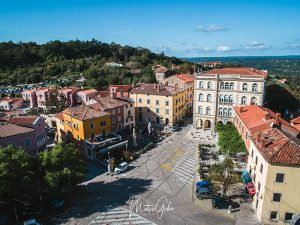 already two thousand years B.G. The remnants of Kunci, one of the settlements called the ‘castellums’, dating from the Bronze Age, can be found in the vicinity of Labin. Its old Illyrian-Celtic name is Albona or Alvona and it was probably founded by Celts in the 4th century B.C. on the ruins of the ancient city. Some historians say it was fortified by the Illyrians in the 11th century B.C. They also say that Albona in the Celtic language means ‘a town on the hill’ or ‘an elevated settlement’.
Titus Livius said that Labin inhabitants were pirates. After the conflicts between the local inhabitants and Romans, which had started in the 3rd century B.C., Istra came under the Romans in 177 B.C. The borderline was the river Rasa. Labin and its surroundings thus became an integral part of Illyrian, the Roman province with a high degree of independence and authority over the nearby settlements. The oldest written document about Labin is a relief from the 3rd century with the insertion ‘RES PUBLICA ALBONESSIUM’.

CULTURAL HERITAGE Porta Sanfior – main town doors of St. Flor dating from 1589 with Labin coat of arms and the Serenissima lion above. Canon dating from Austrian times was put up for the second time on the bastion (torjon) in 1995.

Baroque palace of Battiala-Lazzarini family is now a town museum. Counts Lazzarini, who had several properties in the Labin area, left after World War Two.

Three-nave church of Blessed Virgin Mary’s Birth built in 1336 on the foundations of the small church from the 11th century. It was reconstructed several times. The last reconstruction was in 1993. 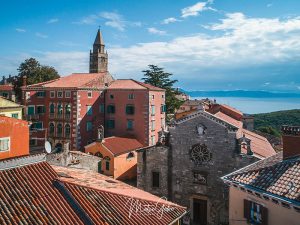 A Venetian lion with a sphere in his mouth – a symbol of Labin recognizing the Venetian government – was put on the front facade in 1604. By the end of that century, in 1688, a baroque statue of senator Antonio Bollani, a combatant against Turks, was put on the same facade. The bust is one of the most beautiful examples of the secular sculptural art of Istria in the 17th century. On the right from the church, there is a palace which belonged to the Schampicchio family.
Church of the B. V.Mary’s Birth decorated with six marble altars. One of them has St.Justin’s relics brought here from Rome in 1664. Main altar and altarpiece with six figures of B.V.M., St.Pauline and Saints : Justin, Sergio, Julian, Tom and Jacob. The author is Natale Schiacione from Dalmatia, the much more valuable altarpiece by the altar of the Madonna of Carmel from the l7th century is believed to be done by the famous painter Jacopo Negriti, better known as Palma the Younger. Valentin Lukas, a young Labin painter from the 19th century; is the author of the painting featuring the Stages of the Cross.

Town loggia – Labin – center of life in the past where news and court verdicts were read out. Peasants danced there every Sunday and on fair days. Built in 1550, it later got a collection of stone monuments. Pillar of shame in front of the loggia.